Following the passing of the renowned Argentine composer and bandoneon player, Laura Escalada Piazzolla founded the Astor Piazzolla Foundation with the mission of preserving and promoting the maestro’s artistic legacy. The Quinteto Astor Piazzolla was formed in 1998 with five outstanding virtuoso musicians who can aesthetically unify under the musical landscape of Piazzolla and Buenos Aires.

Astor Piazzolla’s trademark performance ensemble was the quintet: bandoneon, violin, piano, electric guitar and double bass. Established in 1960 by Piazzolla, the quintet quickly became his favorite tool in the process of creating the sound of Nuevo Tango, which he developed throughout that decade.

The musicians who accompanied him in the quintet were notable performers with exquisite artistic interpretation and skill that Piazzolla appreciated fundamentally, not only for their ability to execute his highly demanding compositions, but also how they enriched his music with their unique personalities.

Piazzolla eventually left Argentina for Europe, setting aside the quintet until 1978, when he revived the group and toured with them through 1988. It was the ensemble which witnessed his fame escalating throughout the world. The repertoire of his second quintet was nurtured on the Nuevo Tango of the 60s and the fresh, experimental compositions Piazzolla had been working on, some of which later became his masterpieces.

Now with more than 20 years and counting, the current legacy group, Quinteto Astor Piazzolla, has performed numerous tours around the United States, Latin America, Europe and Asia, becoming acclaimed and awarded with international recognition; the most recent and prominent being the Latin Grammy for Best Tango Album of 2019.

In these recent years, the group has released four full-length albums (Revolucionario, Fugata, En 3×4, Triunfal), performing with a demanding degree of virtuosic skill and rich artistic interpretation, reviving the classics as well as lesser-known works that haven’t had the chance of being heard around the world, allowing old and new audiences to get both a nostalgic and fresh take on Piazzolla’s work.

Currently, the quintet is preparing the 2021-2022 international tour to commemorate 100 years of Astor Piazzolla. It is a wonderful opportunity to pay homage to the great composer by taking a look back and revisiting his extensive creative career, combining and contrasting both his classical and popular repertoire in the same concert, and exploring a history of intensity, passion and genius. 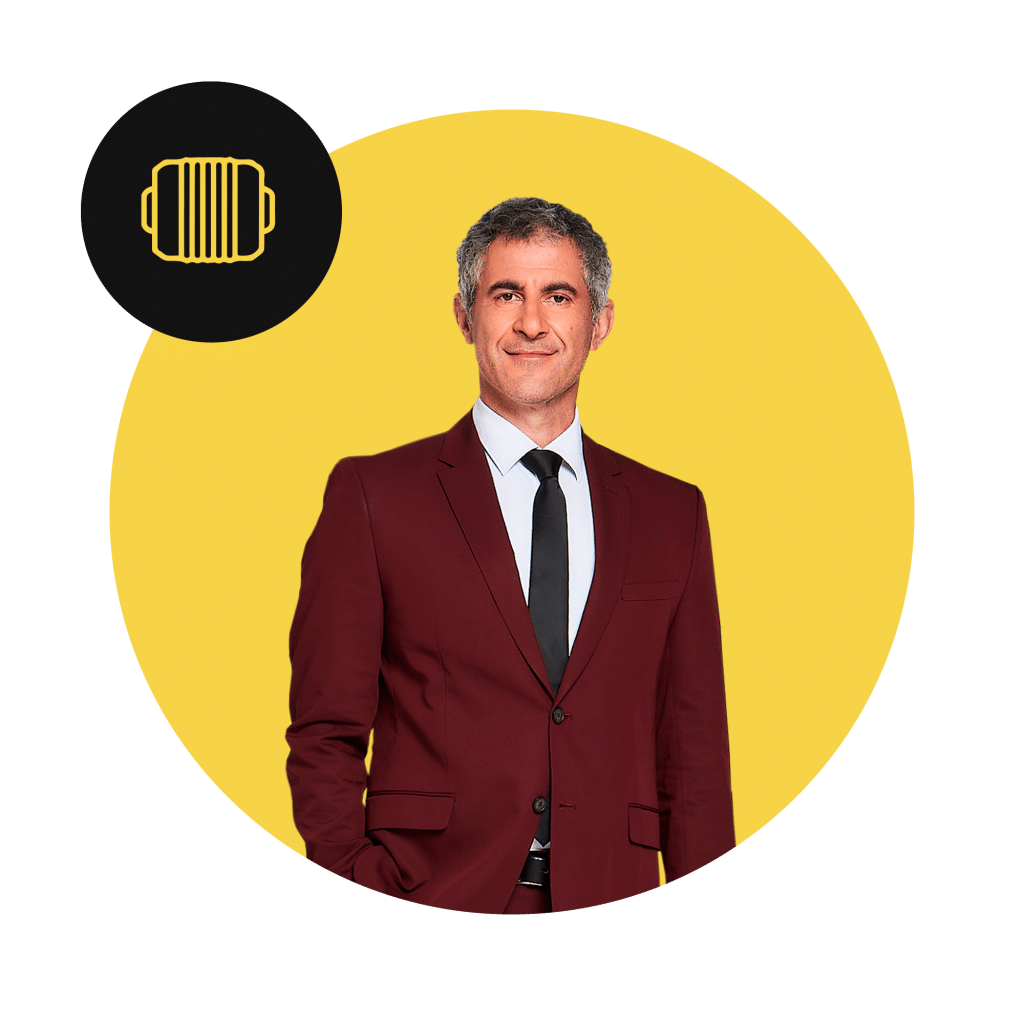 He has recorded the “Concierto para Bandoneón y Orquesta de Astor Piazzolla” for Harmonia Mundi, with the Chamber Orchestra of Teatro Liure, under the musical direction of Josep Pone.

Mainetti has also performed various arrangements of Piazzolla’s tango works for bandoneon and symphony orchestra, conducted by Ernest Martinez Izquierdo, a co-production between OCB and Symphony Orchestra of Navarra.

He premiered “Three Movements for Bandoneón and Ensemble”, written especially for the Composer Conference of 2018 at the Brandeis University, directed by Mario Davidovsky and conducted by James Baker.

As a composer, he has had his work performed live during the screening of the silent film “La vuelta al bulín”, by José Ferreyra, at the Buenos Aires Tango Festival of 2017.

As a soloist, he has also performed with National Symphony Orchestra of Argentina under the musical direction of Pedro Ignacio Calderón, Facundo Agudin, Mariano Chiacchiarini, Jose Maria Sciutto and Luis Vacalov.

Some of his nominations and accolades include: Latin Grammys 2004 for his CD Album “Tres Rincones”, Premios Clarín for Tango Personality of the Year, Premios Ace for the opera “Ultramarina”, and the Premios Gardel for Best Tango Album with the Mainetti-Angeleri Duo.

He was distinguished and awarded with the Diploma of Merit in the category of Classical Music Instrumentalist by the Konex Foundation in 2019.

Currently, he leads his own ensemble, Pablo Mainetti Quinteto, and is part of the Mainetti-Angeleri Duet. Since the year 2019, he has formed part of the Quinteto Astor Piazzolla, taking on the role and responsibility of principal bandoneon, and has toured extensively promoting the music of the maestro Astor Piazzolla. 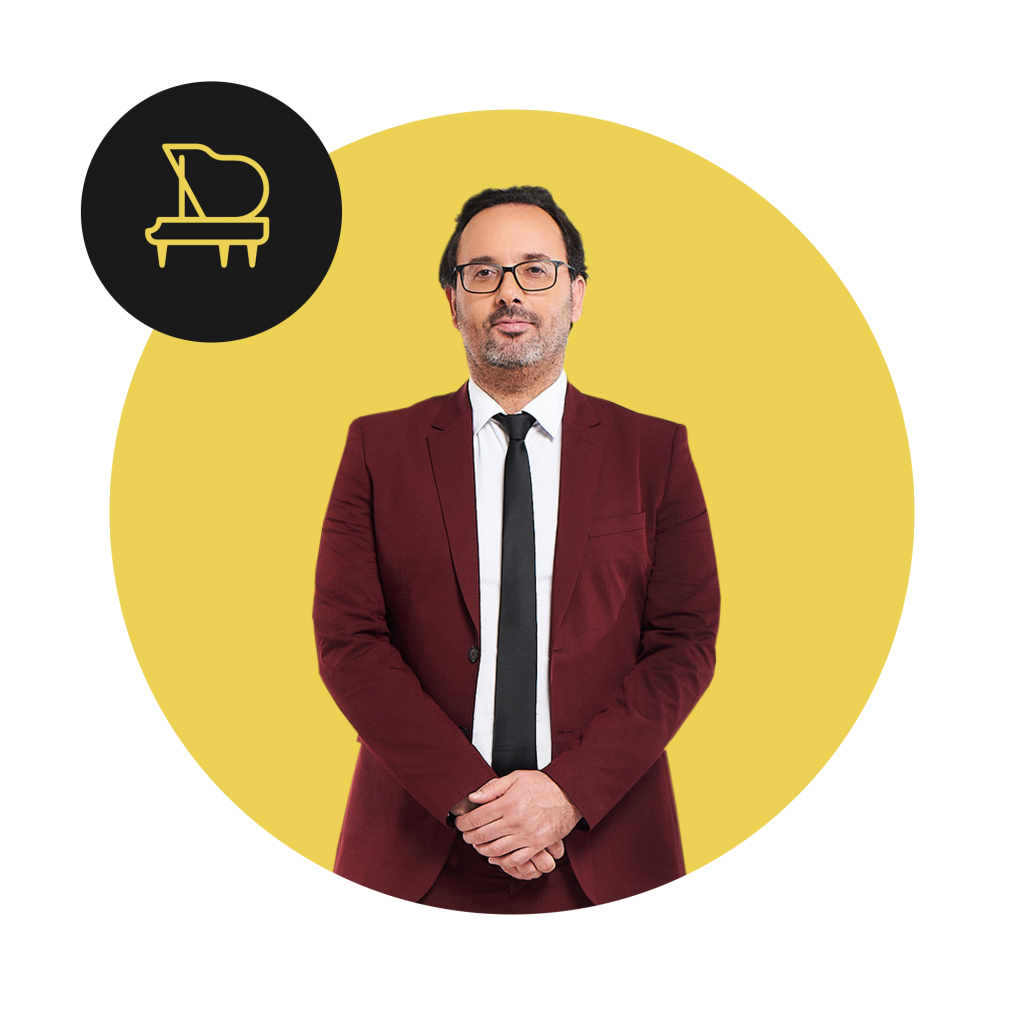 As a composer, he has written works for piano, solo instruments, chamber ensembles, symphonic and varied instrumental formations, ranging from tango to jazz to chamber and orchestral music. He also arranged the music for “The Lost Tango”, by Ute Lemper, presented across many cities in Europe, in addition to Hong Kong and Latin America.

He has also composed and recorded more than 100 original works alongside Escalandrum. And has been commissioned original arrangements for works by Piazzolla, Ginastera, Mozart, Bach, among others.

He has also been nominated by the Latin Grammys for Best Instrumental Album (2011), and four nominations in the Tango category for the following productions: “Ciudad secreta” (2005), “Ciudadana” (2007), “Solo Piazzolla” (2009) alongside María Estela Monti, “Amor y tango” (2014) alongside Marianela Villalobos.

In May of 2019, he was bestowed with the title of “Cultural Personality of the Year” by the Legislature of Buenos Aires.

In 2000 he auditioned to form part of the legacy ensemble that Laura Escalada Piazzolla was creating, he has since formed part of the Quinteto Astor Piazzolla as pianist and arranger. 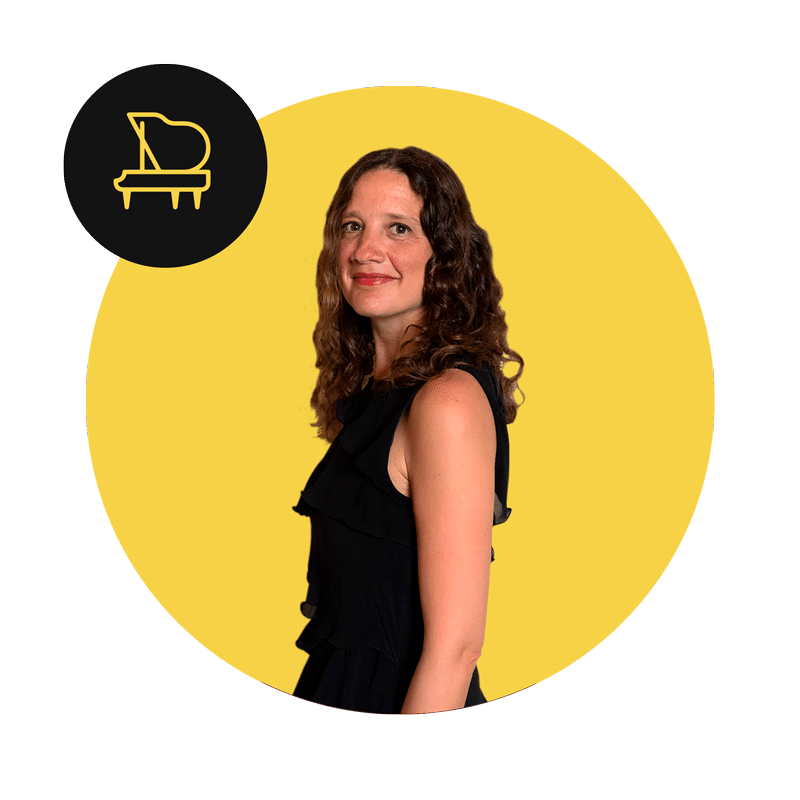 Based in Rotterdam, Bárbara joined the Quinteto Astor Piazzolla in 2021 for the Celebrating 100 Years of Piazzolla world tour.

Previously, she has recorded, performed, and toured with various ensembles, always focusing on tango, most notably the electro-tango ensemble Gotan Project and Tango Tinto, a group that explores the history of tango from the Old Guard to Piazzolla, including their own arrangements and compositions. Bárbara earned a Ph.D. in music at Leiden University, the Netherlands (The title of her dissertation: Creating and Re-creating Tangos: Artistic Processes and Innovations in Music by Pugliese, Salgán, Piazzolla and Beytelmann) and is the author of The Art of Tango, (Routledge, Taylor & Francis Group, 2021), a book with a companion website focusing on tango performance, arranging, and composition.

She also has contributed articles and essays to various musicological publications. When not on tour with the Quinteto Astor Piazzolla, Bárbara is an artistic research coach at Codarts University of the Arts and Fontys University of Fine and Performing Arts, both in the Netherlands. She also concluded a post-doctorate project around tango music creation and education at Codarts – Tango Department (World Music Department) – where she also teaches. 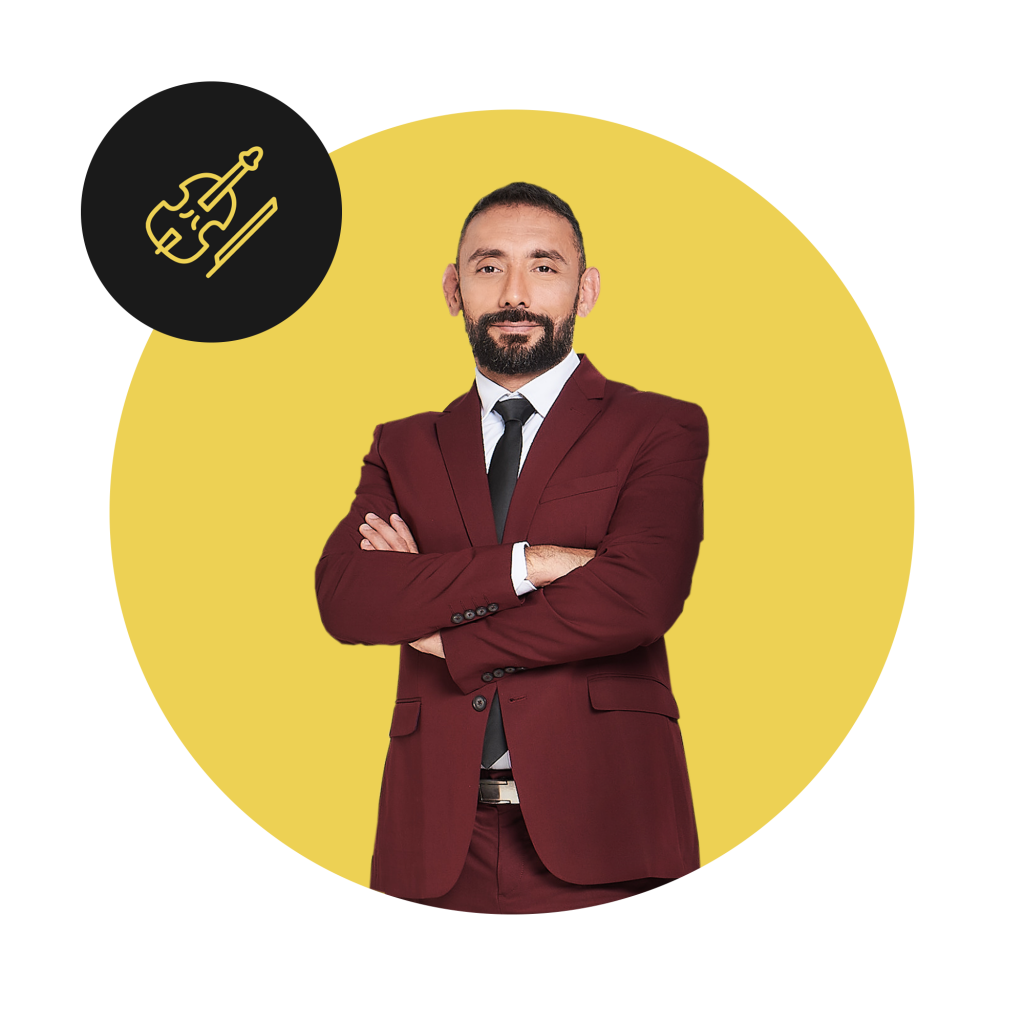 Serdar began his music studies at the age of 7 at the School of Music of Ashgabat in Turkmenistan. He was selected during an international contest among the best young musicians to study at the Moscow Tchaikovsky Conservatory in Russia. After which he continued his studies at the National Conservatory of Music in Ashgabat. At 12 years old he won an international violin contest among Central Asia and Kasakstan, and also obtained the “New Names” Award in 1991 in Turkmenistan.

He became the Head of the Violin Department at the National Conservatory of Music in the city of La Paz, as well as in the Municipal School in the city of El Alto, Bolivia.

As a soloist he has formed part of and participated in many diverse orchestras across Latin America, as well as participating in numerous chamber ensembles.

In 2007 he integrated the Cuarteto Sinfónico of Bolivia as first violin.

He was invited to participate in a series of performances with the Camerata Bariloche. And he also formed part of the Philharmonic Orchestra of Buenos Aires, Argentina.

In 2010 he was selected through open auditions as soloist and substitute concertmaster for the Orchestra of the Teatro Colón.

Currently he is the principal violinist for the ensemble Quinteto Astor Piazzolla, with who he tours around the world, promoting the legacy of the composer who revolutionized tango. 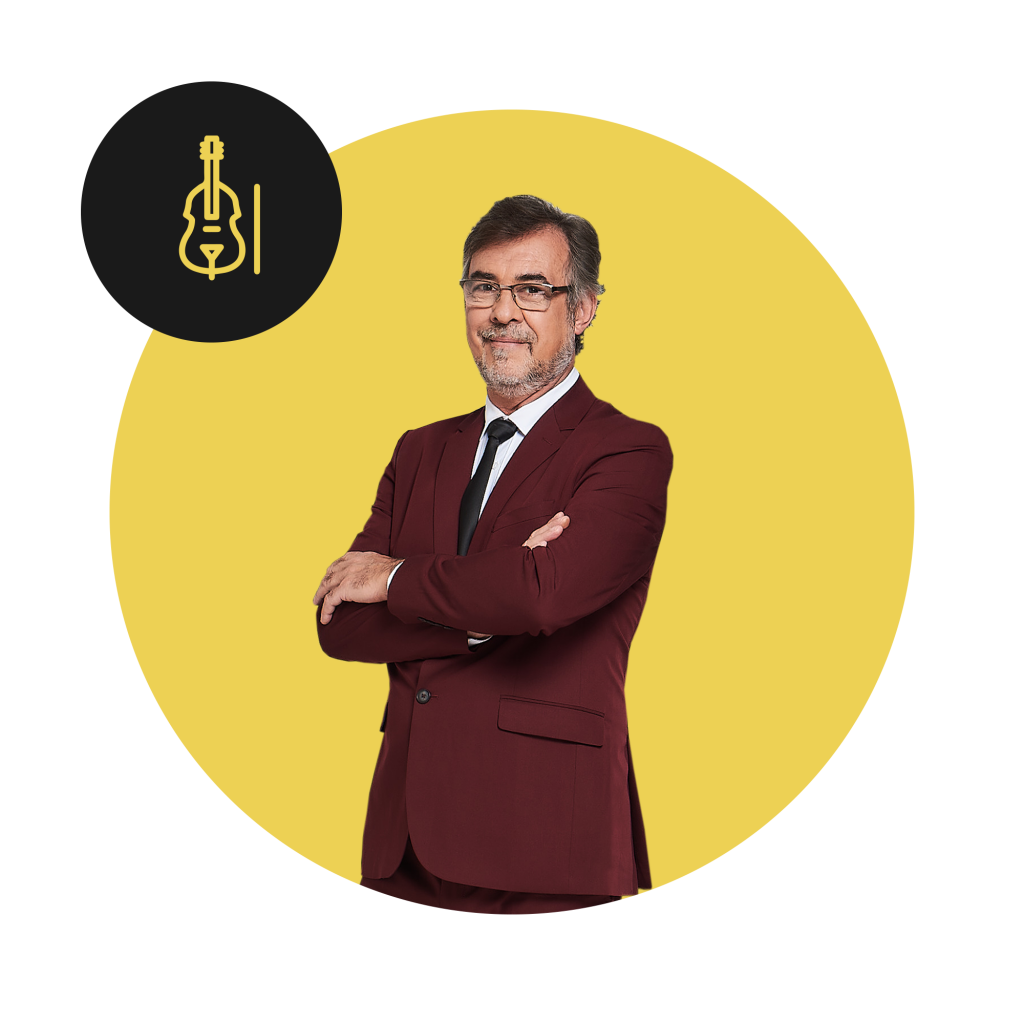 He studied at the “Manuel de Falla” Conservatory with the maestros Hamlet Greco and Ricardo Planas. As a double bass musician he dedicates himself to classical and tango music.

Between 1980 and 1982 he formed part of Radio Nacional’s Youth Chamber Orchestra. In 1985, he auditioned and joined the Mayo Chamber Orchestra where he performed and toured with throughout the United States, Switzerland, Puerto Rico and Mexico until 1999.

For three decades, he was part of the Philharmonic Orchestra of Buenos Aires. At the same time he was active in the popular music scene, particularly in the genre of tango, taking part in numerous productions and performances with maestros such as Antonio Agri, Osvaldo Berlingieri and Leopoldo Federico, among others.

During 2007, he toured throughout France with the renowned ballet dancer Julio Bocca for the show “Bocca Tango”.

He participated in the recording production of the both “Cantora I” and “Cantora II” by Mercedes Sosa.

He was member of the Fernando Suarez Paz Quintet, and the Agri-Zarate-Falasca Trio with who he recorded the album “Prepárense”, which premiered and was toured in Europe with rave reviews.

He has worked with notable music performers such as Joan Manuel Serrat and Susana Rinaldi, touring in countries such as the United States, Switzerland, Spain, Greece, France, Belgium, Cuba, Colombia, Brasil, Uruguay, China, Japan, Vietnam, Australia, among others.

Parallel to his professional work, he develops and mentors the next generation of young double bass players throughout Argentina and Europe.

In 2016 he became the Head of the Double Bass department at the National University of the Arts in Buenos Aires.

He was scouted by the musical director Julian Vat to join the ensemble Quinteto Astor Piazzolla as the solo double bass player. 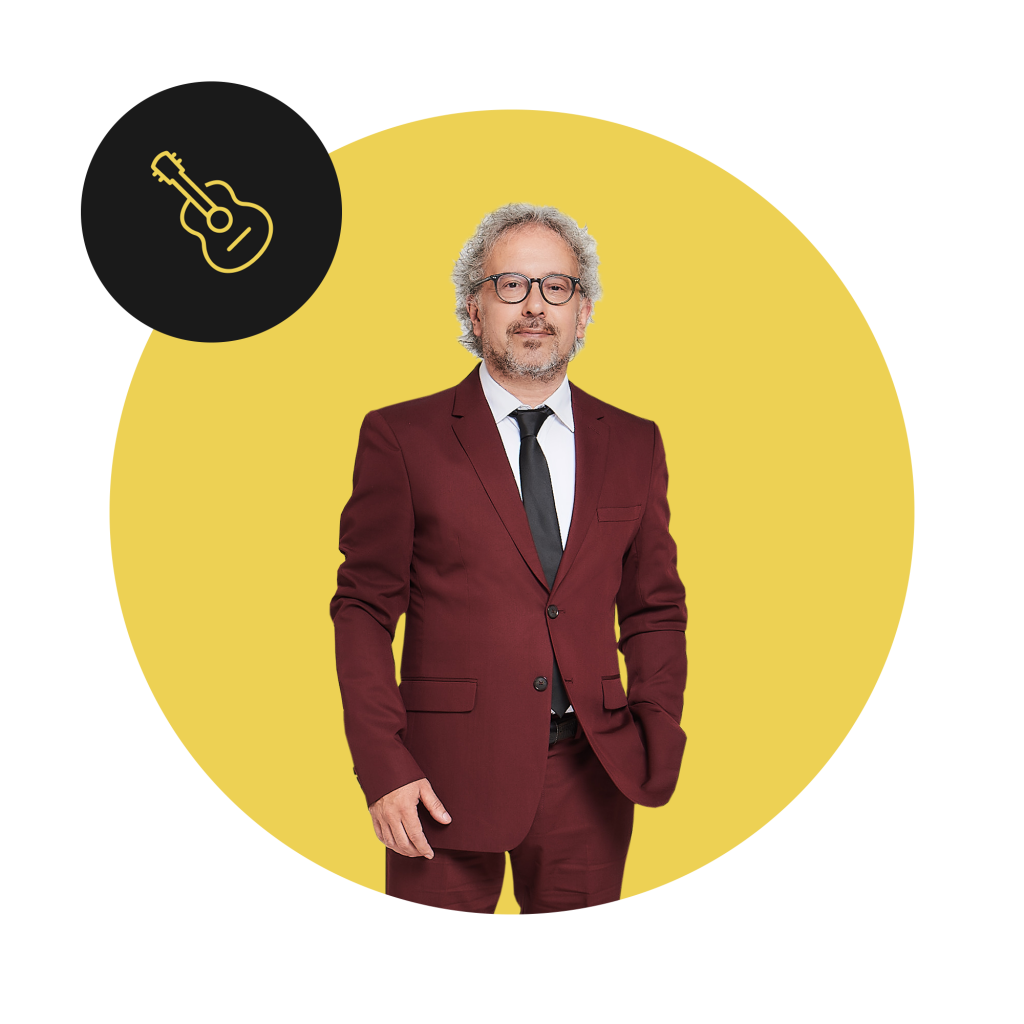 In 1999 he joined the quintet of renown pianist and composer Pablo Zielger, touring in cities such as San Pablo, Rio de Janeiro, Friburgo, Belo Horizonte (Brasil), Haifa, Tel-Aviv, Jerusalem (Israel), Festival de jazz de La Pataia (Uruguay) – with Paquito de Rivera and Brenda Feliciano as special guests -, as well as the Buenos Aires Tango Festival from 1999 to 2004; in the Festival of the Siete Lagos in the city of Bariloche.

He forms part of several ensembles with Pablo Ziegler, including the Nuevo Ensamble Porteño which performed the operita “María de Buenos Aires” by Astor Piazzolla and Horacio Ferrer, in the cities of Bologna and Ravenna (Italy) in 2002, in addition to the Netherlands, Belgium, and Hungary in 2004.

In 2002 he was invited to perform as a soloist with the Symphony Orchestra of Oviedo in Spain, interpreting “Concierto de Liega” by Léo Brouwer, and “Doble Concierto para Bandoneón, Guitarra y Orquesta”, and “Concierto de Nácar” by Astor Piazzolla.

He was the guitarist for the album “Más Tango” by vocalist Adriana Varela.

In 2010 he performed in the show “Del amor” alongside the poet Juan Gelman and the Rodolfo Mederos Trío at the Auditori of Barcelona. With the same ensemble he was selected to perform at the opening of the Buchmesse Gala at the Alte Oper of Frankfurt, Germany, along with the maestro Daniel Baremboin.

In 2012 he participated in the album “Pa que trabaje el grandote” with double bass player Sergio Rivas, a work that explores the history of the double bass in the music of tango.

He has taught numerous workshops and seminars on tango guitar in countries such as Switzerland, Germany, Thailand, Colombia, Brasil, Suriname, Guyana, as well as in Argentina. 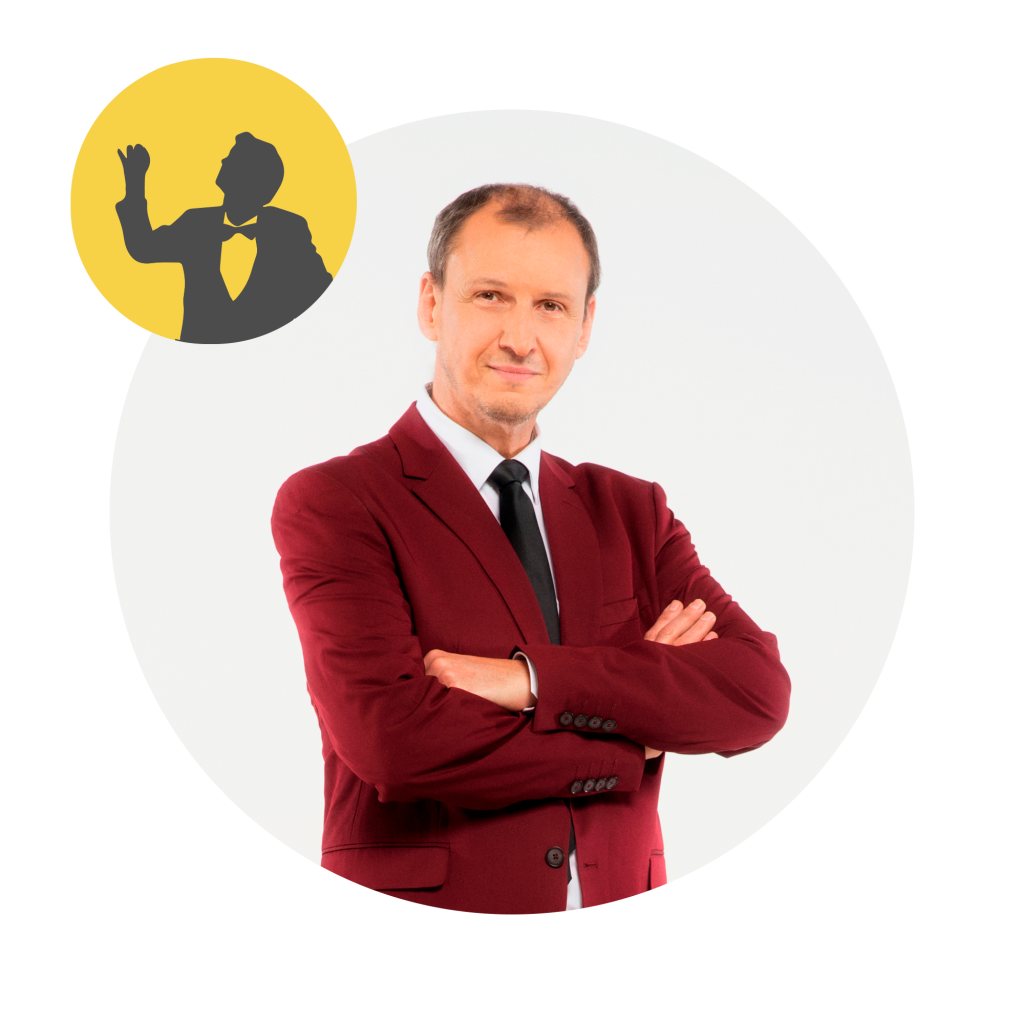 Vat is author to more than 70 musical creations for cinema, ballet and theater. He has also directed performances such as “Cabaret”, “Pingo Argentino”, “Tango de burdel salón y calle” and “Operatango” in Argentina and abroad.

Since 2000 he has interpreted and directed music performances for the Astor Piazzolla Foundation, bringing the Maestro’s music to stages all around the globe. 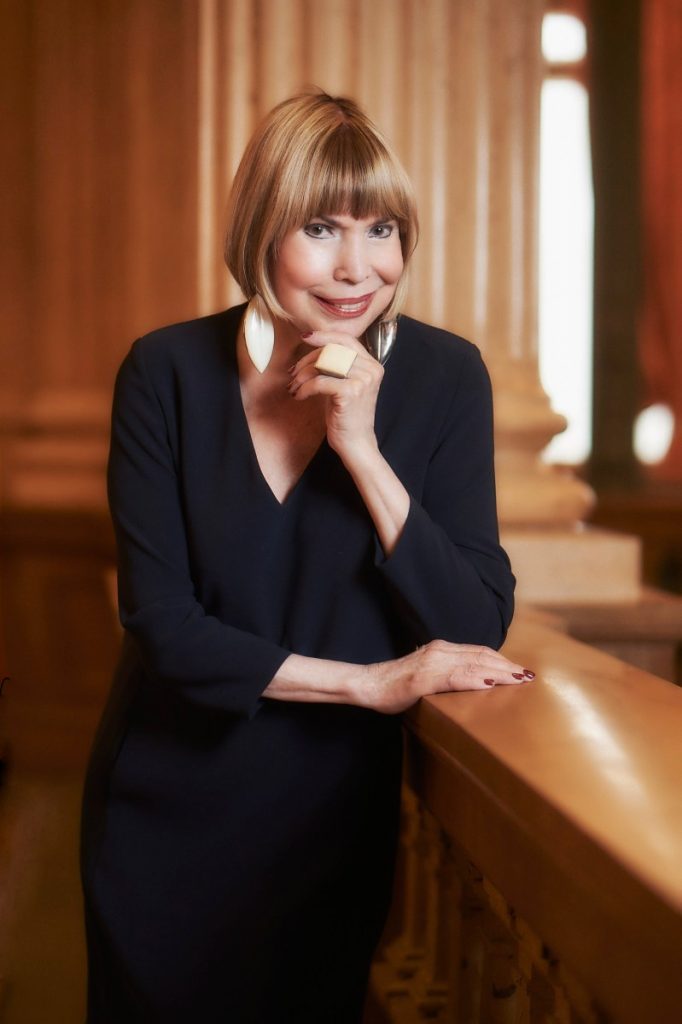 Lyrical singer and former television host Laura Escalada Piazzolla met Astor Piazzolla- a composer who revolutionized the music of tango and created his own unique genre- in 1976 while conducting an interview with him. Shortly thereafter, the two married in France and never parted ways.

In 1995, three years after he passed away, Laura Escalada Piazzolla created the Astor Piazzolla Foundation to preserve and promote his legacy.

As the President of the foundation, Laura Escalada Piazzolla has brought back the famous quintet formation, now Quinteto Astor Piazzolla, through which she realizes ongoing performances of the maestro’s works around the globe.